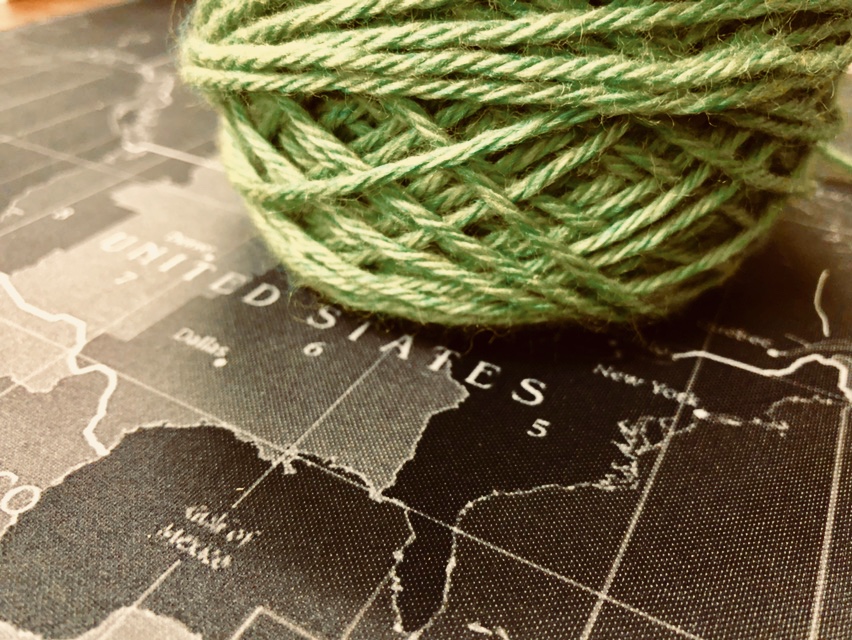 This is when I taught myself to knit, in August of 2001. A neighbor had invited me to work the two weeks of early voting. I had just closed my furniture studio months before and with nothing else to do thought, why not? However, after staring at my coworkers (and my hands) for 8 long hours that very first day, I decided that I couldn't sit and do it again so off to Barnes & Noble I went. I found myself in front of the 'Crafts' section. I knew I wanted to learn to make something with my hands and on the shelf was 'The Step by Step Needlecraft Encyclopedia'. I was intrigued and when I opened it up I fell in love with the knitting patterns. I got the book and went straight to Walmart where, with the help of the clerk, got some cotton yarn and needles. The next day I showed up to work the polls and proceeded to teach myself to knit, out of the book. Very few vote that early in the two week period so after learning I decided to knit every pattern in the book. I started with the first, stockinette, then moved to the next one, and the next one, all the while getting positive feedback from my co-workers and random voters. I didn't finish all of the patterns during that two weeks as the second week gets much busier but I took it home, made a binder to hold all the patterns and have filled that binder up!

I joined the knitting guild in Houston, called the Knit at Night Guild (KANG) and I learned about them through the local yarn shops. Many of the local yarn shops open at the time gave guild members a 10% discount. This perk, combined with the national teachers the guild brings each year, along with knitting retreats and meet ups makes guild membership a no-brainer in my opinion.

Cat Bordhi invited me to apply for what she called her "visionary retreat". Little did I know but she had already had several of them but she was putting together an all-male retreat and that is what I applied for. I was accepted and it was at this retreat, in the beautifully idyllic San Juan islands, where I met other passionate knitters including Michael del Vecchio, Alasdair Post-Quinn, Franklin Habit and Stephen West who shared my passion and together we are reshaping the world of the male knitter.

The first male knitting group in Houston was created because there was not one. A popular yarn shop, Yarns 2 Ewe, (that has since closed) had a regular sit-n-knit one evening a week but I was one of only a couple of guys in attendance. The women in the group were friendly but not that supportive. I thought if the guys could meet on a night by themselves they might feel more comfortable, and more men might even attend. I approached the owner and she agreed to let us meet on a different night and thus Gents & Purls group was created. We recognized Girls with Purls in the name because we didn't want to alienate the women that did want to support us. The night got popular and at one point we had as many as 17 guys in attendance.

I chronicled my trip to the Hill Country Yarn Crawl for an earlier edition of this site. I visited 10 stores (there are more now) and drove over 600 miles collecting yarn, swag and loads of pictures and critiques of the shops.

I started working in a new yarn shop, Knitting In The Loop (it has since closed), one night a week helping them with their Point of Sale system. Additionally, the yarn shop Yarns 2 Ewe closed and our group had to find a different place to meet. Luckily the owner of Knitting In The Loop was happy to let us meet on a different night than their regular sit-n-knit. Over time the owner decided to close shop early on our night and we were instructed to "merge" with the existing group that knit at night, which was exclusively female. Needless to say the group stopped meeting there and eventually, that yarn shop closed as well.

The men's knitting retreats were completely new to me when I was invited to apply for a scholarship to one of them. The scholarship was provided by Skacel, distributor of the famous Addi needle line. I was chosen as the recipient for the Rocky Mountain Men's Knitting Retreat, which was held just outside of Boulder, Colorado. It wasn't since Cat Bordhi's visionary retreat had I felt such camaraderie among men. I gave a Tunisian Crochet presentation which was warmly received and I learned about dying, weaving and so much more on that magical long weekend in July!

In August I published my first pattern on Ravelry - the T.A.P.S. Scarf - for free!